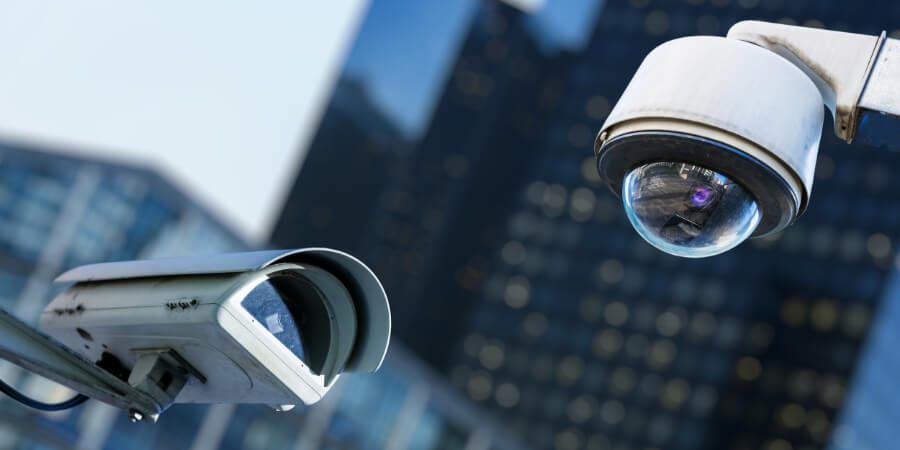 Congratulations! If you’re reading this article, there’s a good chance that you’ve decided to purchase security cameras for your San Francisco, CA home, business or apartment. However, you may have become stuck trying to figure out which equipment is best for your property.

One of the things that San Francisco property owners often struggle to understand is the difference between dome and bullet security cameras. Fortunately, we’re here to provide you with a comparison of the two models, allowing you to make an informed buying decision that will keep your home or business safe.

As their name may indicate, dome security cameras are circular. The actual camera is covered by a protective dome, which is typically transparent glass. These are the black cameras that you commonly see in:

Dome security cameras are advantageous because they are inconspicuous. They often blend into a wall or ceiling seamlessly and do not stick out like a traditional camera. This could allow you to catch people in the act. Additionally, were someone to notice a dome camera, they likely would not be able to determine which way it’s pointing. Many people believe that dome cameras have 360-degrees of coverage, acting as a strong deterrent against crime.

These cameras are also advantageous because they are tamper-proof and vandal-proof. Many home and business owners find that these cameras are significantly more durable than traditional cameras. It’s nearly impossible to dislodge a dome camera or change the area in which it’s recording.

Bullet security cameras feature a cylinder shape and are more what people would consider “conventional” or “traditional” security cameras. Studies show that the threat of a security system is often enough to deter an intruder, which is what makes these cameras beneficial. The hope is that a potential intruder would see the camera and choose not to target your home or business as a result.

These cameras have a long, wide range of vision. Contrary to what their appearance would lead you to believe, they are best suited for large areas like parking lots or backyards. Additionally, bullet cameras are much easier to install than dome cameras. However, it’s much easier to cover up a bullet camera.

Which Option Is Best?

Determining which option for you depends on numerous factors, such as your budget and how much time you have to dedicate toward installation. For instance, dome cameras tend to cost more than bullet cameras and are more challenging to install. So, if prices are your primary concern, you may find it best to purchase bullet cameras. Furthermore, you must remount dome cameras ever time you wish to change the field of view.

The other primary thing you’ll want to consider is how much area you need to cover. Bullet cameras have a more extended and comprehensive range of vision than dome cameras. So, if you’re looking to protect a specific area, such as the front door to your home, you may want to consider a dome camera. If you need to protect your entire backyard, on the other hand, think about a bullet camera.